This is just one example of instantaneous improvement. We could not get any more than about 20Mbps peak throughput out of the UBNT radios. We were doing things like swapping customers to 2' dishes to try to get more bandwidth out of it. Nothing worked.

We swapped out the sector and all customers about a month ago and all of the speed complaints went away. Nearly identical signal levels, even with the customers that went from those 2' dishes back to SMs on reflectors, thanks to the 450's constant output power at every modulation level.

The proof is in the bandwidth graph:

What applications are the customers on this link using? Are they doing VoIP and/or video?

This is a PMP sector feeding a handful of customers and a few micro POPs. There are some customers using VoIP on it. The majority is Netflix all night long.At least the kids are back in school now!

+1 for kids being back in school!

Just moved my house from UBNT 3.65 to 3.6 450 today. 1 mile through a tree with a 20M SM on a reflector. About -58dBm Rx power. 10MHz channel getting 8X both directions. The UBNT gave me about 12Mbps at best. More like 7-8Mbps at night with load on the AP. And very light load at that, maybe 10Mbps on it. We're accelerating our migration to the 450 before the weather turns.

So Matt, where's my 3.6 450 integrated panel SM!? I bet that would work better through the tree. And get the windload from the reflector off of my tower.

Here's the speedtest mini running at our NOC a couple licensed hops away. Simply amazing. 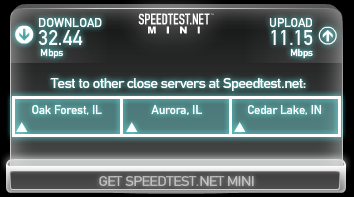 I don't believe the integrated 3.65 panel is going to be released until around Q1 2016.

I don't believe the integrated 3.65 panel is going to be released until around Q1 2016.

Tonight I also stuck in the C3VoIP-200P that Ray sent me. Powering up my SM too. Pretty cool box. Gotta admit though, I'll probably put my MikroTik 751U back in after a couple days of testing. For all the things I do from home, it's easier to have those Latvian Army knife (aka RouterOS) tools.

The wireless on the C3 definitely makes it through the house better, but that's because the MT just has the weak internal PIF antennas. I don't want my wireless making it to the street anyway. I am going to recommend that we start selling these Cambium routers to customers though.

Hopefully Q4? Ya know, if you need something tested, I know a place. :)

Ha, then please correct me!