This document highlights new features and significant updates in cnMaestro On-Premises. cnMaestro 2.1.0 is a major OVA release, and Cambium recommends all customers update to the latest version. cnMaestro 2.1.0 is the next release after 1.6.3 (there was no official 2.0.0).

cnMaestro supports the following monitoring and management functionalities on PTP 650/670/700 in both Cloud and On-Premises. 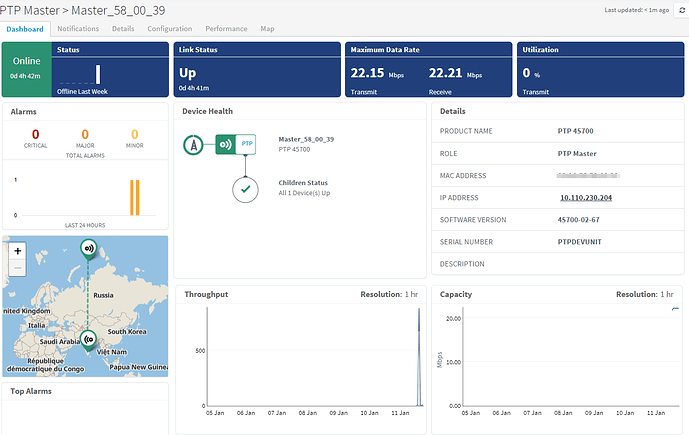 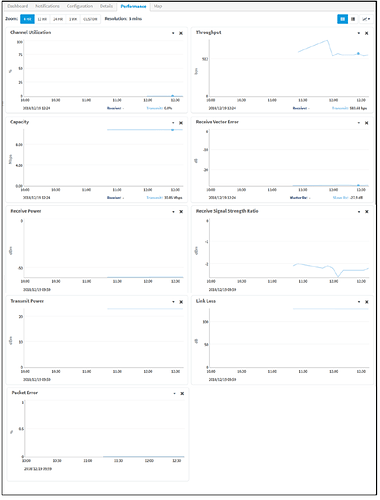 cnMaestro now supports full integration of cnReach devices, including monitoring, configuration, and image upgrade in both Cloud and On-Premises. 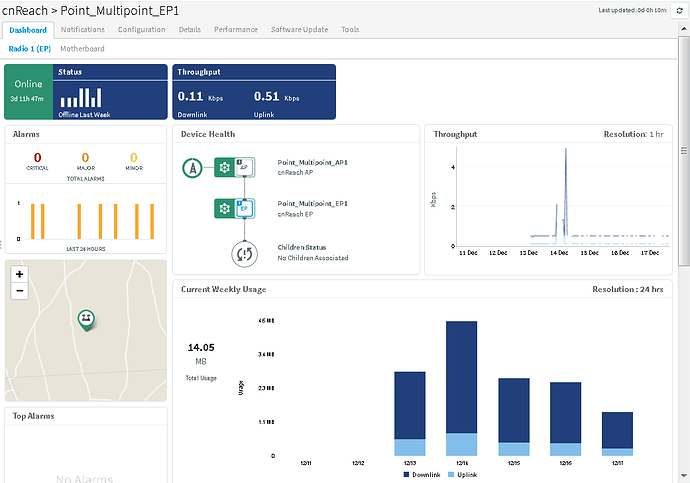 cnReach AP Bulk Software Distribution efficiently copies software to all devices in a VLAN, where it can then be applied.

The Alarm Severity can be filtered by:

The content of the email can be either HTML or JSON format. This feature must be enabled globally in Application > Settings. 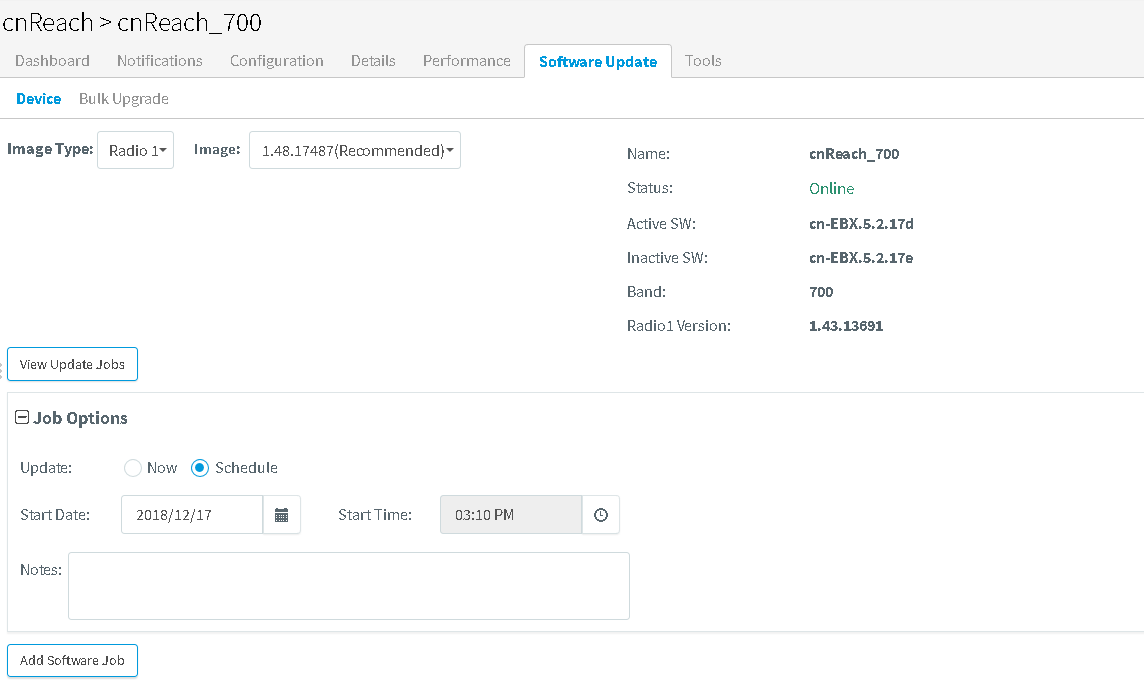 The Dashboard Device Health component has been rewritten to better represent the many device types now supported in cnMaestro. 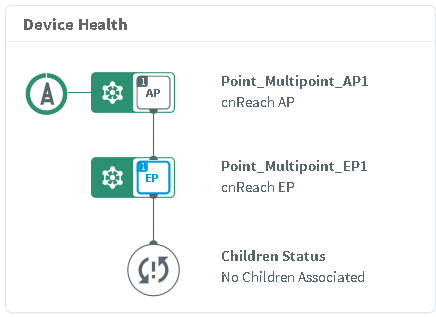 WLAN details unique to a device, such as SSID, Enabling/Disabling SSID and Passphrase, are now supported as part of Device Overrides. These can be configured in the Device Configuration page at Manage > Configuration, and then selecting the device in the tree to update. 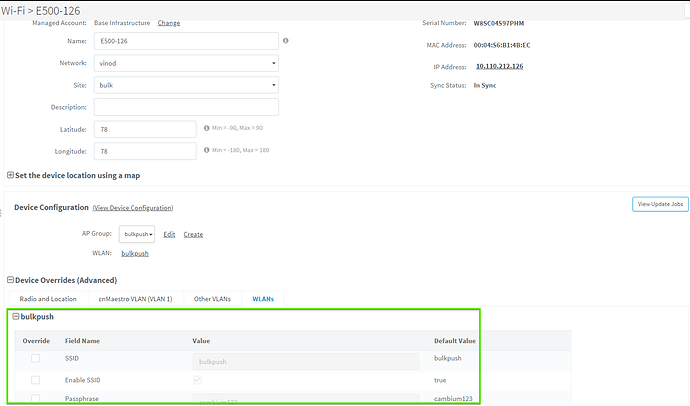 The LQI statistic indicates if a PMP link is degraded by interference or noise. An LQI of 100% means there is no interference. A value of 90% or higher is considered reasonable. Depending on their environment, operators may differ on what is unacceptable (i.e. 80%, 70%, 60%). The Manage > Statistics table shows the LQI, in downlink and uplink, for every PMP SM. An administrator can sort the table by downlink or uplink to identify the SMs experiencing the most significant degradation. Click on an individual PMP SM Performance tab to view the LQI over the last day or week to correlate degradations to certain periods of time.

This represents the percentage of time during the last week in which a PMP AP is congested -- determined by the frame utilization exceeding 90%. The System and Tower dashboards display a list of the top five busy PMP APs. The Manage > Statistics table shows the Busy Index, in downlink and uplink, for every PMP AP. An administrator can sort the table to identify the most congested APs. Click on an individual PMP AP Performance tab to view the frame utilization over the last day or week to understand when usage tends to be highest.

Bulk reboot is added as part of Actions available on Inventory page.

Upgrading to new cnMaestro versions post 2.1.0 will not require an Import/Export. Instead, the images can be updated within the current virtual machine. 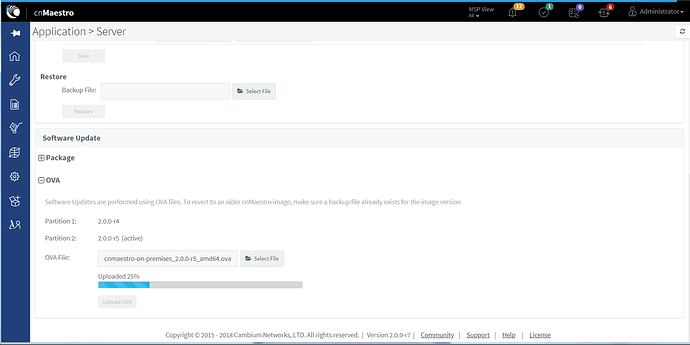 SSH can be enabled through the Console to provide network access to the cnMaestro CLI. The system uses password authentication, and it is recommended only for debugging purposes. SSH is enabled in the Console at Maintenance > SSH. 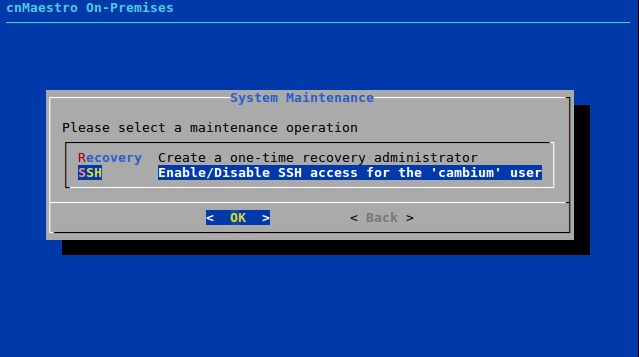 NTP is enabled by default, and external servers can be added in the Console at Settings > NTP. 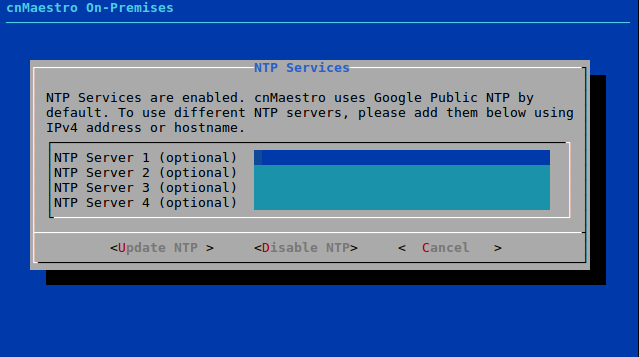 Global cnMaestro Configuration CSV import is available from the Inventory page at the following levels: System, Network, Managed Account, ePMP or PMP AP devices. This feature is supported only for Access and Backhaul devices (AP and SM).

The following parameters are supported for ePMP/PMP AP devices:

The following parameters are supported for ePMP/PMP SM devices:

The Wireless LAN Dashboard displays  cnPilot Home (R-Series) devices in the Client and Network sections (this functionality is already available for cnPilot Enterprise). 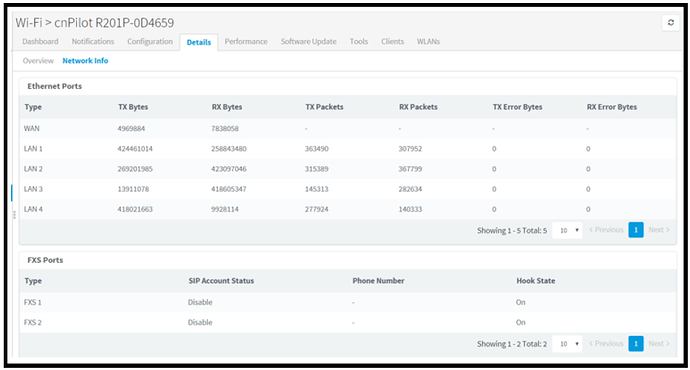 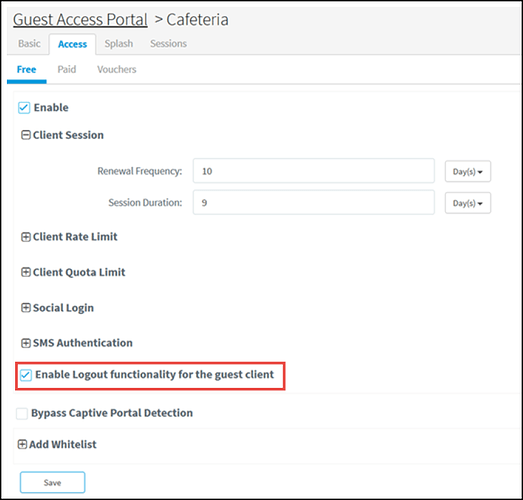 cnMaestro users can change their own passwords, irrespective of their role.

cnMaestro supports both IPv4 and IPv6 networking. The eth0 interface requires IPv4 (for the system IP address and cluster configuration), and optionally IPv6. 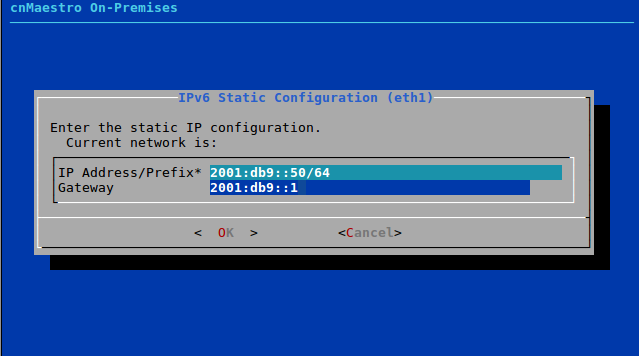 The following updates are in addition to the 2.1.0-r21 release.

These are some great features, the email notifications will be particularly useful!

When do you plan to upgrade the cloud to this version?

Cloud version we will start rolling in the next 2 weeks, we have servers across region so it may take some time.

Hi, during deploy on ESXi 6.7 booting ends in Busy box. Looks like that provided ova file is corrupted or contains some error. Could you check it please?

could you please validate the sha256sum with the OVA which you downloaded?

I did it and it matches.

After powering on  I can see only this ...

i have sent you a private message.

I'd like a bit of clarity before I get really angry - the notes explicitly say "Only data exported from cnMaestro 1.6.3 is supported." I am running Version 1.6.0-r22, and I really don't want to have to backup, update to 1.6.3, reconfigure it and import data, then back that up, update to 2.1.0, and reconfigure and import data again. It's not like this is an ancient version - please tell me that there are no significant differences in the data between these two versions and I can just do the one upgrade...

Hi dshea -- the upgrade process from the 1.6.0 version will require an intermediate step to 1.6.3 (which includes exporting and importing data). The 2.1.0 release removes this complexity moving forward, and it will be upgraded in-system (with no more export/import). However to get to this point, the baseline data needs to be exported off a cnMaestro 1.6.1 OVA installation with a package upgrade to 1.6.3. This can be done either by importing into 1.6.1 and upgrading to 1.6.3, or by installing 1.6.1 and upgrading to 1.6.3 before the import.

Both 2.1.0 and 1.6.3 have significant database updates that make this process especially complex as we look at supporting earlier versions for data migration. 1.6.3 added an updated data model for MSP and multiple tenants  (which entailed a significant transition), and 2.1.0 includes additional data restructuring for performance and scalability.

we have error in vmware ESXi.

we have error in vmware ESXi.

Upgraded to this new version.

Imported backup file and after some few hours seems all be up but first thing i noticed is that the Towrs and Sites are not in alphabetical order but are all mixed up...

I keep you updated with some testing...

I have sent private message.

Hi.
Could you please help me with configuring email settings?
We get error:

You have to use OVF vmware tool to convert from SHA256 to SHA1. Or use vmware greater than 6.5

Tried it on a VMware 6.5u1 box I run personally and it boots fine.

Anyone else running Xen figure out how to get this OVA to boot?