Prerequisites for on boarding to cnMaestro :-

Device software images can be downloaded from support.cambiumnetworks.com or from the cnMaestro NOC  server itself by navigating to Operate->Software Update->Manage Images. Select your device type to display the available images, and then click the download icon 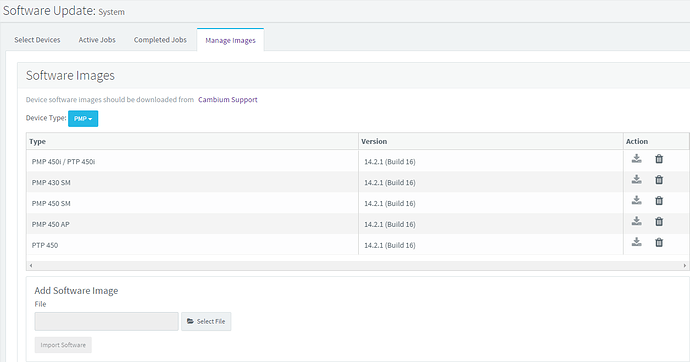 Order of Device On boarding:-

cnMaestro server has many debugging tools. The cnMaestro’s tools are listed below:

Zero Touch on boarding of the PMP SMs when the corresponding AP is on boarded :-

First the link should be established between the PMP AP and SM either by configuring manually or using the ICC method . Once the AP and SM link is established user needs to on board the PMP AP using the different methods outlined  above in the on boarding section. Once the AP is on boarded to the cnMaestro Cloud or On premises server the corresponding PMP SMs will on board automatically to the cnMaestro server using the Zero touch token that is communicated between the AP and SMs. This is applicable for the existing SMs connected to the AP or the SMs that will be connected newly to the AP. Once the PMP AP/SM appears in the on boarding queue of the cnMaestro server user needs to approve the devices in order to start managing the devices.